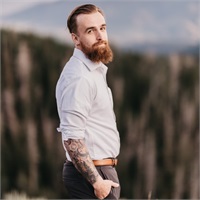 Nick was born and raised in Dallas, Texas and moved to Utah in the Summer of 2017 to work with Adobe before moving to FMG Suite. An English major at Utah Valley University, Nick spends his free time with his wife Cassi. They were married in August of 2019 after meeting and working together at FMG Suite. They have an 8 year old daughter named Aria and live in Provo, Utah.

Living 5 minutes away from the mouth of a canyon, they find themselves in the mountains every weekend either kayaking, hiking, rock climbing, going on picnics, skiing or snowboarding, and just overall going on adventures. They have 2 Blue-Red Heelers, Colby and Zia, who they love like additional children and who wear them out like additional children.

Nick enjoys music and finding new underground artists such as: Katastro, Stop Light Observations, and Little Stranger. He has played guitar for 16 years and is enjoying watching his daughter follow his footsteps. He thrives in helping those around him and is active member in his community.